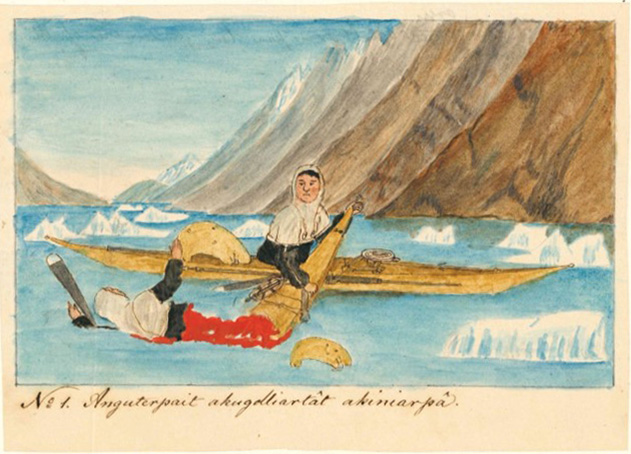 Aalut Kangermiu – Aron from Kangeq (1822-1869) is a storyteller and artist. Through watercolours, prints, drawings, and in writing, he depicted, among other things, hunting, cultural encounters, everyday life, landscapes, and interiors. Aron is himself a historical figure who was double-sided in more than one way – ways that were present in Greenland during his lifetime. He was first and foremost a hunter and, like many others, was dependent on his seal hunting, but he was also a catechist at the Herrnhut congregation in Nuuk and, like very few in his time, could both read and write Greenlandic.

It is through the newspaper Atuagagdliutit that Aron’s works are first published. The newspaper’s founder, Heinrich Rink, issued an invitation in 1858 with a request to submit contributions concerning Greenlandic legends or “… anything that could serve as amusement or entertainment for the Greenlanders. Also wanted are maps and drawings, made by Natives… ”.

It is this call that Aron responds to, and many of the publications that came out after the invitation were with contributions from Aron from Kangeq. It is also through Rink that, Aron becomes aware of the woodcut as an art form, as Rink sends him examples of European woodcuts. Aron’s woodcuts were often processed from his own drawings, but also from others’ drawings, and conversely, some of Aron’s drawings were processed by others, such as by Marcus Lynge from Nuuk.

Aron’s legacy is seen in several places in Greenlandic art today and Aron is even present on social media, where his direct style and eye-catching characters make him accessible to people all over the world. A total of 350 works are known from his hand and this exhibition shows 50 of his watercolors and more than 30 of his graphic works reprinted after the original printing blocks, as well as six of the original printing blocks.

Read the first article in the series here: Aalut and Collective Authorship at the Nuuk Printing Press by Bart Pushaw