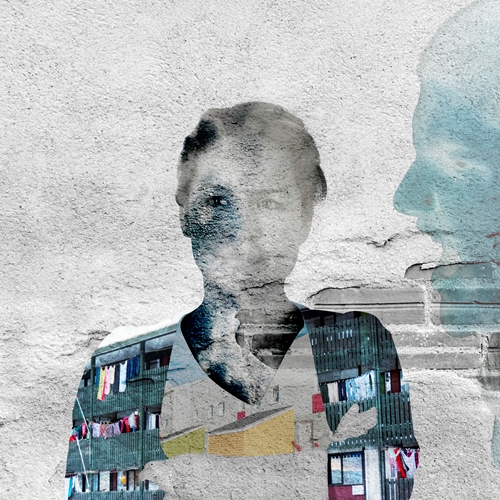 My Home – My Society

Ivínguak` Stork Høegh (1982) is a contemporary Greenlandic artist currently working with digital photo collages. In these a traditional Inuit culture is mixed with a modern globalized world. The expression is both raw and street-like while soft and vulnerable.

Ivínguak takes most of the photographs used in the collages herself – the rest she borrows with permission. As an element or background the collages often holds these raw and peeling walls. The artist herself says she is attracted to the raw expression and often finds herself taking close up photographs of peeling and scrambled walls on her way around in the city.

She often plays with political messages or ongoing debates in the Greenlandic society in her digital photo collages. She gets inspiration from the Greenlandic rap music, which deal with some of the taboos in society like drug or alcohol addiction, care failure, suicide and political irresponsibility. National identity or just identity also seems like an ongoing theme in her collages.

In this exhibition the collages deals with my home – my society. The colours are not vivid and clear but neutral and blue, and when you move closer you will see a myriad of nuances and details. There are many layers to be uncovered and to discover in Ivínguak` Stork Høegh’s collages. She mixes and merges a raw and peeling wall with the sky and clouds; the hard and concrete with the light and spherical.

Ivínguak` Stork Høegh is educated at Det Jyske Kunstakademi – an art academy in Jutland, Denmark – and as a graphic designer also in Denmark.