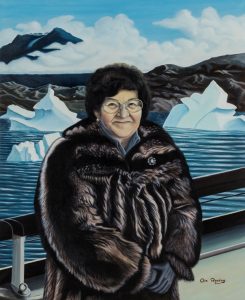 February 19th 2018 Helene Junge passed away. With her husband, Svend Junge, she donated Nuuk Art Museum to the citizens and the city of Nuuk in 2005.

Even though Nuuk Art Museum often is associated with Svend Junge, Helene Junge is not insignificant to the collection today belonging to Nuuk Art Museum. It is said that she held the paddle at actions, and when she had set her eyes on something, she got it.

Since 2005 additions have been made to the Junge collection, but the Junge collection is still the base and majority of Nuuk Art Museum. A portrait painted by Christian ”Nuunu” Rosing of Helene Junge hangs in the foyer and museum shop besides the portrait of Svend Junge.

The couple met at the local hospital where Helene worked. Svend Junge began collecting art buying tupilacs and figurines from the hospitalized with tubercolosis. Figurines and craftsmanship collected from the 1960s and on from all over Greenland forms over half of the art collection from Svend and Helene Junge.

The couple took a fancy to art like Emanuel A. Petersen, J.E.C. Rasmussen, Andreas Riis Carstensen and other primarily Danish artist, who during the 19th century and the beginning of the 20th century travelled Greenland and painted sceneries of the nature and romantic portraits of people.

Behind a man stands a woman – Helene stood behind Svend Junge and the art collection of Nuuk Art Museum.